Happy Valentine's Day to you all!  I hope you're enjoying a beautiful love-filled day!

Since it's Valentine's Day, I thought I'd take a moment to share a little about my own love story.  I don't often share about myself and thought this would be a fun celebration of this beautiful day of love.  Though, admittedly, we're not the most romantic or traditional of couples.

Many years ago, not long after I moved to Postville during my freshman year of high school (so about 20 if you're counting), I first met the boy who would one day be my husband.  Little did I know at the time, we were destined to journey through life together.  Josh was the brother of one of my new friends.  He was a nerdy sophomore at the time.  I hung out at their house from time to time, but didn't really get to know him until later.

My sophomore year of high school, I started hanging out with a new group of friends (who are fantastic and we still get together!).  Josh was part of the new group.  He was always immersed in one book or another when we hung out.  As a group, we were pretty nerdy, playing Dungeons and Dragons and just all around a bit dorky.  Josh and I didn't talk much.  In fact, he really didn't talk much ever.  He was generally just the guy hanging out off to the side, reading a book and commenting when it was his turn in the game.

I briefly dated another friend in the group, I'm talking about a few months maybe.  Anyway, we broke up a few weeks before prom, which another friend of mine, Steph, found to be positively horrible.  I clearly needed to go to prom with the group, even though I was a year younger.  I was a sophomore at the time and prom was for juniors and seniors unless you were their date.  So she pushed for Josh to ask me to prom so I could join them for the festivities.

Well, at the assurance of Steph, who told me I'd be going to prom with Josh, I went to go pick out a dress.  Of course, at this point he hadn't even actually asked me yet!  I had fun shopping and was able to find a dress from the slim selection on clearance.  There weren't many options as we were so close to prom, mere days away.  The next day, Josh asked.  Of course, I said yes.  I had the dress and Steph had already insisted on the plan for going out to eat before prom.  I was ready to go and enjoy the evening with friends. 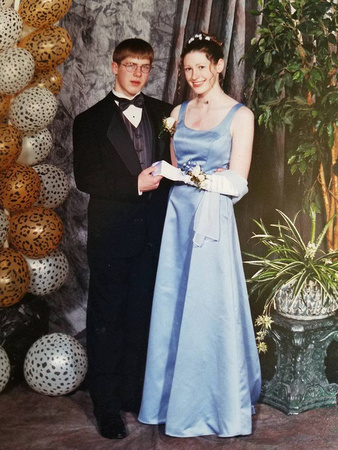 Weren't we cute?!  In case the balloons didn't tip you off, the theme was "Welcome to the Jungle."  Anyway, we enjoyed a great night with our group of friends.  We even danced once or twice!  At after-prom, he offered me his jacket since I was cold.  It was very sweet.

We started officially dating not long after that.  Our first date was to go see Austin Powers 2 in Decorah.  We had it planned out and I waited for him to pick me up.  A little back story here, Josh was well known for being perpetually late to gatherings with friends.  If we got together at 1:00, he'd arrive around 2:00 or 2:30.  I'm still not quite sure why that was, as he's pretty punctual since we've been together and I cannot take any credit for that.  However, at the time, our friends joked that they'd tell him an earlier start time so he'd actually arrive on time.

Back to our first date, he arrived on time, if not a little early.  He later confessed to getting into town extra early and hanging with a friend until it was time to pick me up.  We headed to Decorah to go see the second Austin Powers movie.  After the movie, we headed to Whippy Dip, a fantastic ice cream shack, for a treat before he dropped me off back home.  I knew very early on that this was the man I'd spend the rest of my life with.  Call me crazy, but I knew. 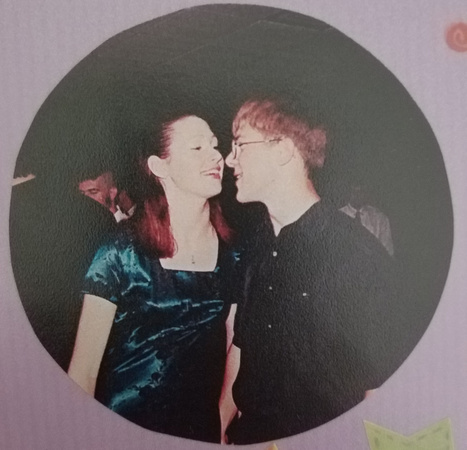 Some really poor quality photos of photos from our scrapbook.
Above: Upward Bound Final Banquet 2001?
Below: Random picture of two nerds circa 2002 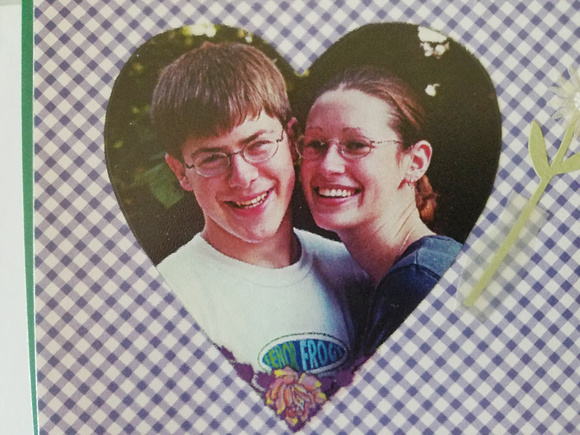 Well, that really was the beginning of it all.  We spent the next few summers at Luther College's Upward Bound program together, and of course the school years were spent at the same school until Josh graduated.  We enjoyed two more proms together, his senior and he came back from college to join me for my senior prom.  He went to Luther and I followed suit the year after.

During his freshman year of college, much to my surprise, Josh enlisted in the US Army Reserves.  At the time, I wasn't sure how I felt about it.  I think I was in shock since we'd never really discussed it.  He assured me that the unit he was joining hadn't been deployed in ages (if ever).  He spent the next two summers in Basic in South Carolina, followed by AIT in Mississippi.  We made the long distance thing work.  Lots of letters were written!  I'm pretty sure there are a few file folders stuffed full of letters from those summers.  Some day, we'll pull those out and show our kids.  I'm pretty sure all of mine are incredibly dorky, so maybe we won't show the kids...

Josh's junior year of college, my sophomore year, we received news we never thought we'd hear.  Josh was being deployed to Iraq as part of Operation Enduring Freedom.  That March, before his unit mobilized, we talked a lot about our future, what this deployment meant, and life.  We both agreed that our future was together, so we were engaged!  Ta-da!  Just like that.  There was no romantic proposal, in fact no "Will you marry me?" was ever asked as far as I can recall.  It was nothing worthy of a rom-com by any means.  Heck there wasn't even a ring.  There was just a young couple (not kidding about young, I was 19 and he was 21!) who knew that their future was brighter together.

We had a little time to contact a local jeweler to begin the process of creating custom rings.  I'm not a diamond gal.  It's just not me.  They're beautiful, but I'll take a sapphire any day of the week.  I guess it was just us keeping with our non-traditional streak.  Our jeweler, while quirky and quite a character, was fantastic and had my ring ready before Josh left for Ft. Lenardwood to out-process that April. 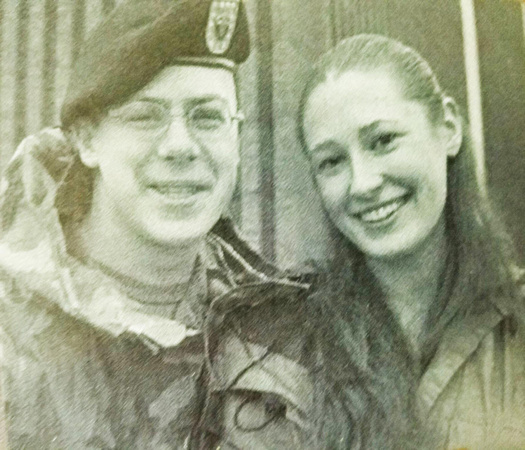 The day the convoy left Decorah for Ft. Leonard Wood. Trying to be positive, not knowing what to expect.

While he was at Ft. Lenard Wood, we stayed in touch over the phone.  However, those were the days of roaming charges, so phone calls were brief.  I was so happy to hear  his unit was going to have a three day pass over Mother's Day weekend.  We chatted and decided it was silly to wait to get married.  So, on a Friday in early May, Josh drove back to Decorah from Missouri.  Then, we headed to Preston, MN, and met with a judge to waive the waiting period for a marriage license and marry us that afternoon.

We may have neglected to tell his parents until a few days before, since we weren't sure if it would all work out.  I looked into options in Iowa, but there wasn't any way to waive the three-day waiting period, as they couldn't promise a judge would be there to do so.  But as luck would have it, we could meet with a judge in Minnesota.  So Josh's parents, along with his siblings and my close friend, joined us at the courthouse to witness our marriage.  My family was living in North Carolina and Florida at the time, so they were unable to join us.  Though, my dad was so happy to hear the news when we shared it with him!

It was a whirlwind of a weekend.  I received a call as Josh was on the road back to Ft. Leonard Wood.  They had gotten notice that they'd be shipping out early the next morning.  Three days after we were married, his boots were on the ground in Kuwait.  It was surreal.  I spent that year while he was gone keeping myself as busy as possible.  I took 21 credits each semester, worked two jobs, and began to build my business.  It helped the time pass and kept me too distracted to worry as much.

Thankfully, he was able to come home on leave for two weeks during his deployment, by which time his wedding ring was finally ready.  But all in all, we only saw each other a little over two weeks for our entire first year of marriage.  That, my friends, was rough.  Not that we didn't know what we were getting into, but knowledge doesn't necessarily make the reality any easier.  Communication wasn't quite as accessible for either of us.  My cell phone was limited (remember the Nokia phones that only had snake and you had to cycle through letters by pressing the numbers repeatedly in order to text? It was a different world...man we're old) and internet was limited to dial-up.  We talked a few times a week on good weeks, some weeks not at all.

We made it though.  I even talked him into having an actual wedding after he got home!  It was pretty low key.  Our ceremony was at Yellow River Forest, in Northeast Iowa and our reception was across the river in Prairie du Chein, WI. 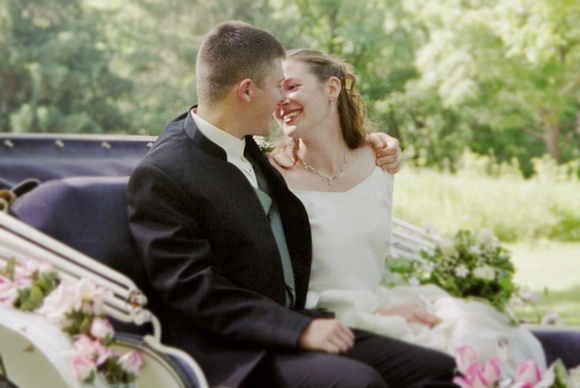 In the years since, we've survived two moves, two children, another deployment, many home remodels, and so much more together.  We may not be the most romantic, but we have each other and that's all that matters.  We have traveled together to China, Australia, Japan, Iceland, and France.  It has been an incredible journey so far! 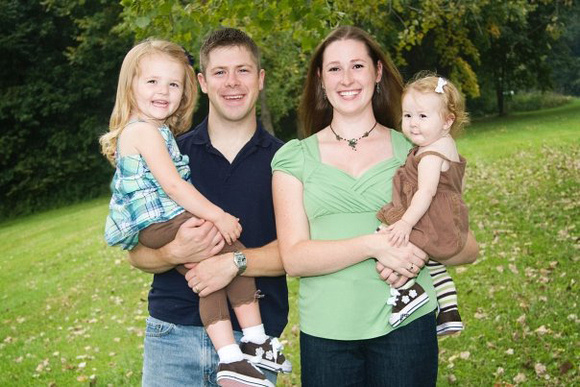 There are days it's hard to believe our kiddos were ever so little! 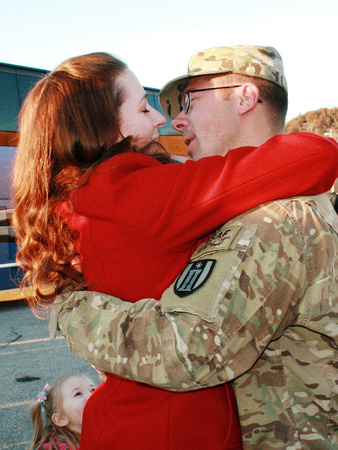 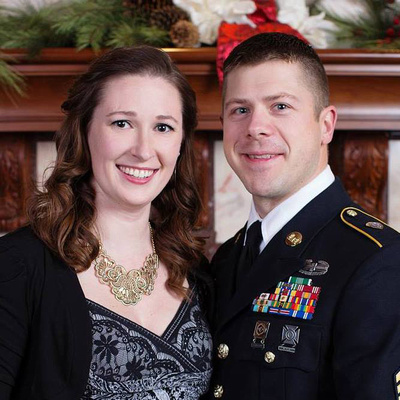 Me and my soldier at an Army dining out event 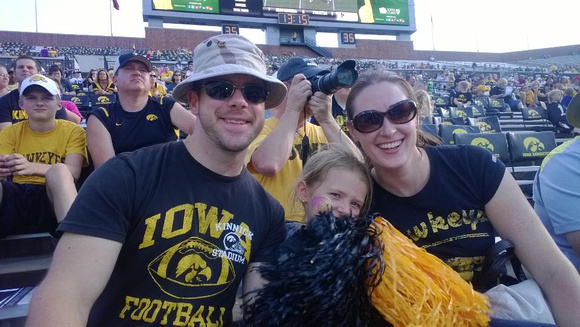 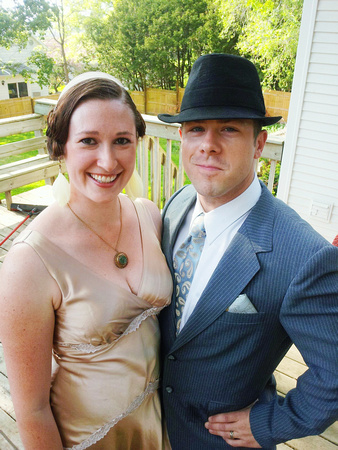 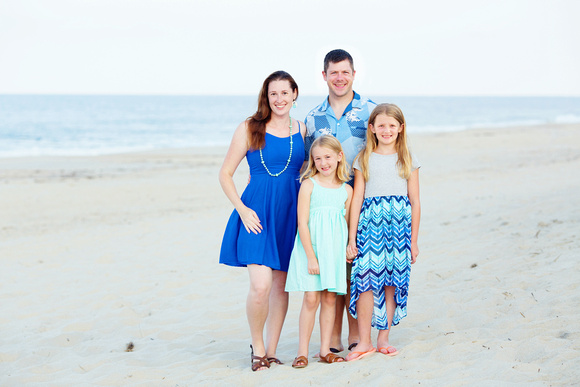 Our little family.  This gives me all the feels.  Love them with all my heart! 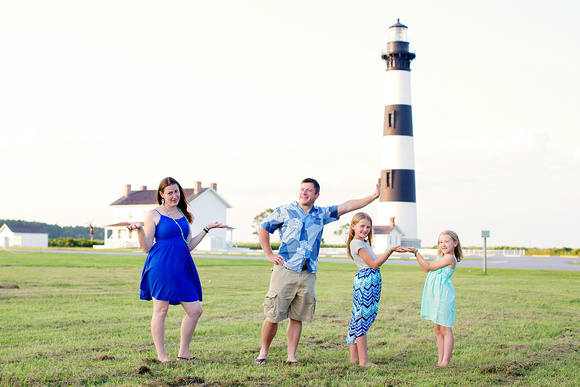 Umm, yeah.  We may still be a bit silly.  I wouldn't have it any other way.

We will celebrate our 15th wedding anniversary this May.  Crazy to think we'll have been together for 19 years this summer!  Shortly thereafter, we'll be heading off to Italy for a long awaited honeymoon.  We didn't have much of a chance when we actually got married, as the Army had other plans for Josh's overseas travel, and life sort of cropped up along the way since.  All of our other travels have been with other groups, friends or family; so we are thrilled to have a chance to travel at last as just the two of us.  We can think of no better way to celebrate than to visit a country we both are excited to see, rich in art and history, things we love.  Oh and good food, we love good food.  Mmmm....

If you've read this far, kudos!  I'm sure our story is not the most exciting thing out there, but it's perhaps my favorite thing in all the world.  It's us, quirky and nerdy and an adventure.  Thanks for reading and may you have a Valentine's Day filled with love and joy!